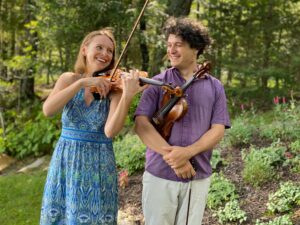 As a classical violinist, Rebekah has performed and toured extensively with the Toronto Symphony Orchestra, The National Ballet of Canada, The Canadian Opera Company, and in recitals with famous baritone, Russell Braun.

An active studio musician, Rebekah is also at home playing folk, klezmer, pop, latin, and jazz and can be heard on numerous recordings.  She has also performed and collaborated on theatre productions including award-winning shows with playwright/actress, Tracey Erin Smith.

Aside from her active performing career, Rebekah holds a doctorate in violin performance from the University of Toronto as well as degrees in violin from the Cleveland Institute of Music.

Rebekah is a member of the Payadora Tango Ensemble which has performed sold-out shows at the St Lawrence Centre for the Arts, Four Series Centre World Music Series and Toronto Music Festival.

Drew Jurecka is a Toronto-based violinist/vocalist who is comfortable in many genres. Trained classically at the Cleveland Institute of Music, during his final year Drew played a solo with the great Dave Brubeck and his quartet at Severance Hall. While at the Henry Mancini Institute in Los Angeles, a summer program for jazz and aspiring studio musicians, Drew had the opportunity to play at the Hollywood Bowl with Diana Krall, Dianne Reeves, and Shirley Horn.

Drew has played, written or arranged on more than 150 records, including several JUNO winning and Grammy nominated albums. He can be heard on numerous film and television soundtracks.
Drew has toured internationally as a sideman and with his own projects. He spent five years on the road with Jeff Healey, and now plays as part of Jill Barber’s regular band.

He is a faculty member at Humber College where he has helped to develop a unique jazz strings program that includes technique classes, ensembles and private lessons.

We are delighted to announce that we are launching our 2021-22 season in just a few weeks! We are changing the format of our concerts a little bit so that you can have a more direct connection to our musicians. These concerts will still be online, but we are going… END_OF_DOCUMENT_TOKEN_TO_BE_REPLACED

The board of directors of Xenia Concerts Inc. is pleased to announce the appointment of Rory McLeod as the organization’s new Executive and Artistic Director. Rory comes to Xenia with an impressive background both artistically and corporately as the innovative co-founder of Pocket Concerts, a thoughtfully curated chamber music series that… END_OF_DOCUMENT_TOKEN_TO_BE_REPLACED

Are you a music lover who is interested in the music creation process? If so, join us for this special event! Xenia Concerts and National accessArts Centre are pleased to announce the launch of this exciting endeavour! sound.colLAB is a multi-stage project that will bring together musicians and composer with… END_OF_DOCUMENT_TOKEN_TO_BE_REPLACED

We are absolutely thrilled to announce the beginning of our 2020/21 season of concerts! We’ll be presenting livestreams for at least the majority of this year, featuring phenomenal artists and ensembles who are bound to thrill, energise, and entertain you. We hope you’ll take this chance to join us on… END_OF_DOCUMENT_TOKEN_TO_BE_REPLACED

We are proud to let you know that Xenia Concerts was recently featured in the Whole Note Magazine! Last month, pianist Angela Park joined us for a livestreamed piano concert, as part of our ongoing livestream series. Angela performed an array of dazzling works for piano centred around the theme… END_OF_DOCUMENT_TOKEN_TO_BE_REPLACED

Rebekah Wolkstein and Drew Jurecka performed an amazingly fun hour of music as part of our livestream series. Click here to watch a video of their performance! END_OF_DOCUMENT_TOKEN_TO_BE_REPLACED

Over the past month, Xenia made the shift to presenting Livestream Concerts, and will continue to do so until social distancing restrictions are lifted. Without the help of The Co-operators, we wouldn’t have been able to make this change, and for that, we would like to thank them for being… END_OF_DOCUMENT_TOKEN_TO_BE_REPLACED

This montage from a recent Xenia concert is a great snapshot of what it’s like to attend one of our concerts. END_OF_DOCUMENT_TOKEN_TO_BE_REPLACED